Things to do / Cenotaph / Learn History 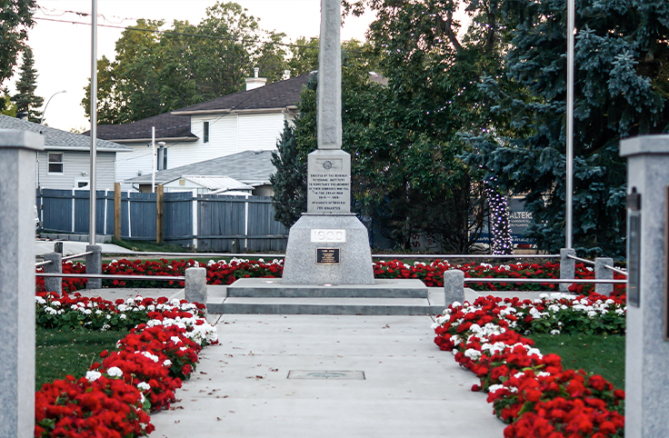 Located in the Beverly Heights neighbourhood in Northeast Edmonton, the Beverly Heights Cenotaph Park is a memorial park dedicated to soldiers who fought and died in wars starting with the First World War. In the centre of the park stands a cenotaph monument erected by the Beverly Veteran’s Association in 1920 to remember the fallen soldiers who served in the First World War from the Town of Beverly. The monument continues to this day to remember soldiers who served their country to date with annual Remembrance Day ceremonies being held on the site.

The Beverly Heights Cenotaph Park is significant for its association with the themes of war memorial and remembrance. This cenotaph is the oldest war memorial in Edmonton and possibly the first war memorial built in Alberta, commemorating the men who served and died in the First World War.

The Beverly Heights Cenotaph Park is significant for its association with the theme of urban development in Edmonton. Memorial Park, as it was called in 1920, was established completely through community initiative illustrating the value of community in the Town of Beverly. Now a part of Edmonton, this tight knit community remains as it was in 1920, seeking to preserve the memory of their local servicemen.